In a makeshift studio in the back of my home...

Willow Lake is a bedroom studio in the mountains of Asheville, North Carolina. My name is James Moats and I offer mixing, mastering, and small project recording solutions. I specialize in mixing home, live, and studio recordings and am confident that I can help get more out of your dry, flat recordings.

I wrote an app earlier this month that lists all the VST effects and instruments used in a directory full of Reaper sessions. The intended benefit of this is to allow you to reinstall Windows or get a new computer and have a definitive list of what effects need to be reinstalled. 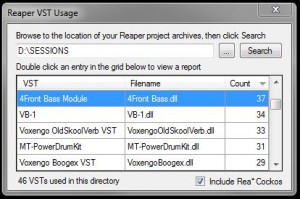 I usually have hundreds of VSTs laying around that I installed, tried once, and promptly forgot about. This makes it a lot easier when starting fresh to trim the fat and get only the necessary VSTs reinstalled.

Just download the file, extract it and then run Setup.exe.

After installing, run the app. Click the ellipsis (…) button to browse to the location of your Reaper projects, then click Search.

When the results come up, you can optionally remove VSTs that are installed with Reaper from the list by unchecking the option at the bottom right. Columns are sortable and the form is resizable.

Sorry, it’s for Windows only.

I started off recording in Cool Edit Pro (“two point ohhhhhhhh”), which was a great DAW and is now Adobe Audition, which is a little too Adobe for my liking. Then, like now, CEP was terrible at dealing with samples and MIDI.

I later discovered Sony Acid Pro, which was great for working with samples, but was terrible as a general use DAW. So, I began using Acid when dealing with samples and loops, then would mix the project down and then take a single WAV file over to Audition to record other live instruments and what-not in a real DAW.

I have since moved on to Reaper, because that’s where all the cool kids play. Unfortunately, it has been a bit of a configuration nightmare for me. Lots of little annoyances along the way… But, every time, after some research, I find there’s a check box option to change the default behavior that is bugging me.

Back when I was working solely in Acid, there was one thing that constantly biting me on the back side. When you copy a MIDI clip to a location later in the song, like copying the drum line from the first verse to repeat in the second verse, Acid would treat that as another instance of the same clip. So, coming out of the first chorus, you add a big crash hit to punctuate the change. Then work on through the second verse, customizing as you go so that it isn’t just the same pattern repeated from the first verse.

Half an hour later, you go back and listen from the beginning of the song and realize you also changed the first verse’s drums to match. To get a unique copy of the clip to edit, you have to right click on it and copy to a new clip. Then you’ll be safe to edit the second verse separately from the first.

Now I use Reaper exclusively. By default, Reaper works the opposite with clips. When you copy a MIDI item and use it later in the project, it becomes a separate item that is in no way related to the original.

Whattya know, there’s a check box option for that in Reaper.

This time, it was a setting labeled “Pool MIDI source data when pasting or duplicating media items”.

At the beginning of the writing and recording process, it would be great to be able to work with a single “verse” drum line or bass line, customizing all the verses at once when the guitars and real bass are being written and recorded. Later in the process, once everything has been recorded and I am adding drum fills to break up the monotony of drum loops, it would be nice to be working with individual instances of loops.

I decided that for my purposes, the most useful setting for me would be for it to work like Acid did, “pooling” the clips, because I make a lot more changes during the writing process than I do when I am finishing up.

I have been continually impressed with Reaper and how often it is updated and how configurable it is. But, that comes at the cost of still needing to Google solutions to simple behaviors, even after having used it for years now.

I still feel that Cool Edit Pro/Audition is better as a DAW and Acid is better at things like envelopes, loops, samples, and clips. However, neither of those come even close to how well Reaper handles both of those things at the same time.

Reaper isn’t free, as it will passively remind you when opening the program every day for the rest of your life, but seriously, do it. Buy it now. You’ll feel good about yourself.